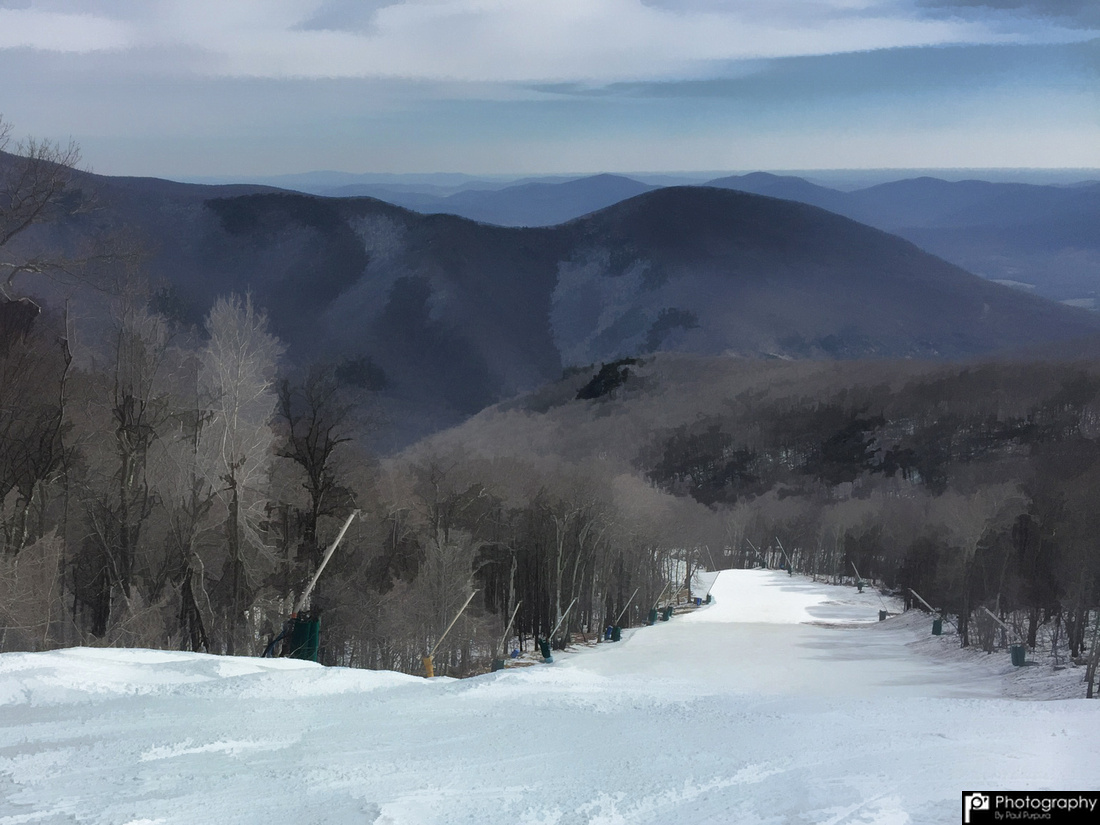 UNTIL NEXT SEASONLooking down Upper Cliffhanger at Wintergreen Resort, Roseland, Virginia

Every year at this time I feel a little sad. It's the end of ski season. Once again I must put my skis away for the next 8 months until December's winter winds arrive once more. One of my clients absolutely hates winter and makes no bones about it on social media, come to think of it, my ex-wife hates winter too. I think most people hate winter. Let's face it, it makes for hazardous driving conditions, you have to shovel snow, the days are short, the nights are long, and it is a proven fact that people are more depressed during the winter months.

I must say that I used to hate winter for all of the above reasons. I was a lifeguard at the Virginia Beach Oceanfront from 1970 to 1975. Those years were some of the happiest of my life and I will cherish those memories forever. In 1977, I moved to South Florida as a career move. I also learned how to scuba dive and later became an instructor. In 1995 I moved to Central Virginia as another career move, and it was here that I learned how to ski. My love for the sport was instant. Starting at age forty five I was not the most graceful skier but I learned nevertheless. After skiing for about 5 years, I became an instructor at Wintergreen Resort and I can honestly say that after my 14th season of teaching, my love for the sport grows even more. So I am at odds with most people about winter.

Actually, I am very fortunate. Winter does not affect me the way is does most people. My children are gown and I live alone. I have a wonderful little place on top of Devil's Knob that I often refer to as "My Humble Abode". Yes, we do get to bad weather up here, but I can walk to the slopes when I teach so driving is not an issue. And if I do need something like eggs or milk, I am in walking distance from a small grocery store. So I am in my own little world up here.

And so, we come to the end of Ski Season. Actually to be more correct, I should say Snow Sports Season. I will miss skiing, and I will miss teaching. I will miss talking to clients. Those of you who know me know that I am very gregarious and will talk to almost anyone. I love finding out where people are from, what they do for a living, and why they want to learn how to ski. I remember some of the lessons that I taught this year, one in particular was teaching a 3 year old girl how to ski. I hold a Child Specialist rating from the Professional Ski Instructors Of America, so teaching children is a regular part of my role as an instructor. My three year old student was a very sweet young lady. She was quite athletic for her age, and although I had to use a "Kid Clip" to keep the tips of her skis together, she was able to stop and turn very well. We rode the people mover lift in the learning area a couple of times, and then, she saw the Potato Patch Lift. She said, "I want to ride that" in a rather decisive tone of voice. So we skied down to the lift from the learning area and we rode it back up. She was thrilled, as was her parents who watched from below.

I also had a three hour lesson with a seven year old boy who just happened to play ice hockey. It was this third time skiing and because of his ice skating skills, he was a natural on skis. He moved the skis naturally and could easily do hockey stops. I further refined his ski skills so that was doing parallel turns, and doing them smoothly. We had a blast, and of course we through snow balls at each other towards the end of the lesson.

In addition to teaching, there is also the exhilleration of skiing for myself. earlier this week, we some the best ski conditions of the season. I have said many times that the best skiing often happens in March.  After taking the photograph which later became the work displayed in this post, I skied this trail known as "Upper Cliffhanger" which is one of the more challenging trails, a.k.a., a black diamond. As I carved one turn after another, I cannot describe the joy I was feeling in the moment. I was one with the trail, feeling each feature as it was transmitted to my skis. The wind in my face was terrific. This is why people ski and snowboard.

Do I like the other seasons? Of course I do. As the days get longer and warmer, I do my "other profession" as a professional photographer, specifically, family events and the like. During the summer, I volunteer my time photographing performances for the Wintergreen Performing Arts (www.wintergreenperformingarts.com) during their Summer Festival. I always photograph the 4th of July Fireworks show up here at the resort. And during the fall, there is always the autumn scenery. So I do not dislike the other seasons, actually I need them to make a living. But when when winter approaches, I always look forward to skiing, as well as teaching.

I hope you all now understand why I feel about winter the way I do.