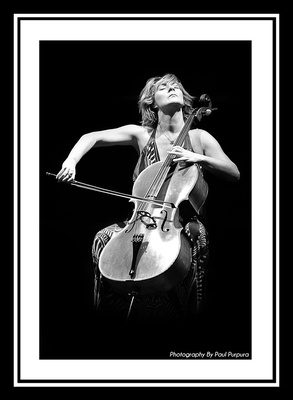 This week I would like to share with you what I feel is one of my greatest photographic works. As I look upon it, words fail me and I cannot put my feelings into words. I have titled this work "Rapture", not only because of the expression on the subject's face, but also because I am enraptured when ever I look upon it. What you see here is an expression of myself not only as a photographer, but also as an artist. The subject of the work is  renowned cellist Tanya Anisimova who has performed all over the world. A few years ago, Ms. Anisimova performed at the Wintergreen Performing Arts Summer Music Festival, and it was at this performance where I took the photograph, or the digital negative, that became this photographic work. I would like to share with you all how this photograph came to be, and hopefully not bore you too much along the way.

In every photoshoot I do, I have a plan to best capture the activity of the event. I have to be very watchful, and react quickly to what's happening to "get the shot." For example, when I photograph a concert, I will get a wide shot of the orchestra, a close up of the conductor, close ups of the musicians, and finally, the conductor and orchestra taking a bow and the end of the performance. By doing such I can capture the power of the performance, which is my overall plan. By being watchful, I can capture the expressions on the musicians faces, especially if the musical work is complex such as Rachmaninoff's Third Piano Concerto.

When I photograph a soloist, I am more focused and my plan narrows to capturing the musician's virtuosity. Such was the case for today's blog photograph. The photograph is very simple in its composition, but what it conveys is beyond words. I waited for this photograph, it's composition was planned and everything had to come together at the right moment. First, note only the solitary light on Ms. Anisimova. At no time is flash permitted during a performance, so any photograph taken while she was looking straight ahead or down at her instrument would cast her face in shadow. So I waited. I waited for her to look up so her face would be lit, and for her arm to be aligned properly with her instrument. After several tries, I "got the shot" , or the foundation for what you see here.

After the concert, the transformation began, i.e., making the photograph into a work of art. First issue, the concert took place during the day and the backstage was visible. The backstage wall had a 2x6 beam about 4 feet off the floor that extended all the way across the stage, and from the perspective of where I took the photograph it gave the illusion of going straight through Ms. Anisimova's head. Next issue, there were the backs of heads of members in the audience which were a another distraction, and finally, there were technical corrections needed to enhance the photograph. These issues were resolved in post processing. But the work was not done yet. I wanted to present a more powerful image to highlight Ms. Anisimova's virtuosity. The original photograph was taken in color --- more distractions. What, you may ask? Her clothing. So I converted the photograph to black and white. By eliminating distractions you look at her face, her expression of rapture and her at-one-ness with her instrument. Matting and framing adds the final touches. And that, my friend's was my plan. I feel I have succeeded. I hope you do too.